For those that know me well, I doubt it will come as a tremendous surprise to find out I really enjoyed Portland, and the culture and people were right up my alley. However, before I dive into that I will pick up from my last post. After our bike ride we went back to the car and continued on to the diner. The lunch there was great, I had a sausage and egg sandwich, which was completely homemade (the best!) on brioche. Something was so satisfying about that lunch after the ride and the mediocre breakfast we had. After a solid hour relaxing and enjoying our food it was back on the road again, with our sights set on Portland.

We had only about an hour of our drive to the city left, so needless to say it went by pretty fast after that breather. We hit Portland at about 11am and the sun was shining this time!  We stopped at our camp ground for the night and made sure we got our spot for that evening.  This was on the outskirts of the city, where numerous campgrounds were available as it turned out. We stopped in a nice wooded area which had loose dirt filled plots all staked off with rocks around the perimeter. It looked like a really great spot to spend the evening later. 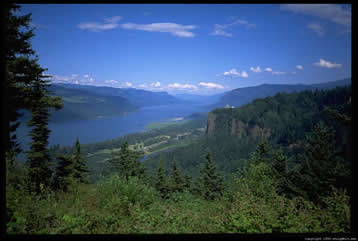 After getting that all squared away, we continued on into a place we had heard about from our friends: the Columbia River Gorge. We drove into the scenic area and decided to take the longer ways around. Wow, this place was gorgeous. There were tiny waterfalls lining the side of the roads and gorgeous woodlands around. We stopped regularly getting out and hiking into the brush to see more waterfalls (and often being greeted by spectacular views like the ones in the picture here).

This was one of the most beautiful places we visited on our entire journey around the US, and it deserves to be seriously talked about. I recommend the Gorge to anyone travelling in the Portland area as it’s just breathtaking. The scenic highway climbs up the mountains and gives you spectacular views of the ocean, trees, and covered woodlands. It’s really a one of of a kind experience.

After we finished up at the Columbia Gorge we headed into the city to check out a few watering holes and obscure places we had heard about. We stopped at a coffee shop that also had a laundromat attached to it, inside of all places. This was quite strange, but as it turned out, was more or less just how a lot of things in Portland are. People are out and about, and biking around constantly. Along with this, they do a lot of more “hipster” things, like drinking coffee on their Apple laptops, while their clothes are in the washer.

Portland is a city full of smart, educated people and the average level people live in the city appears to be quite high. It’s not necessarily that people there make a lot of money or something, but more they live a certain “upper middle class” lifestyle with technology, good clothes and love to socialize. After the coffee shop we hopped over to have lunch and a beer at a nearby pub and tried out some of the local brewed beers. They had some great choices, lots of IPAs of course, and we relaxed for a few hours.  What happened after will be covered in our next post, as there was more to come with our experiences in Portland.